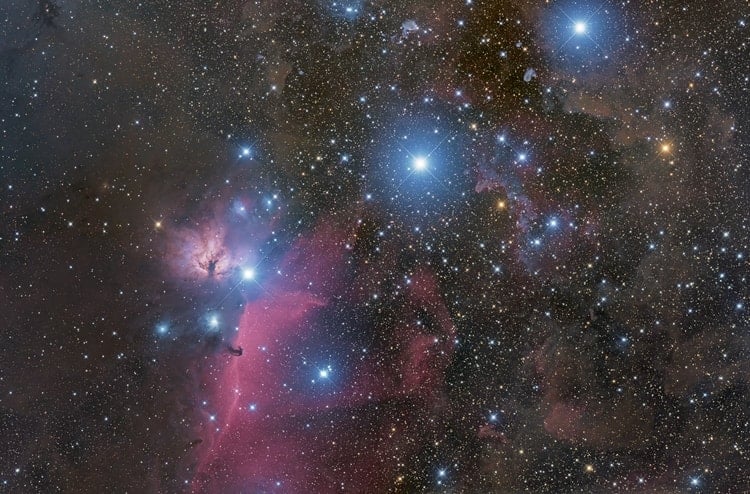 In this article I will talk about the amazing Orion’s Belt Constellation and its spiritual meaning.

Orion is a constellation that is commonly known as the hunter. The stars are very bright in the sky. It can be seen all across the hemispheres and it is generally recognized worldwide. This constellation is attached to many gods and it possesses a lot of spiritual meanings, which can be useful to our lives.

Seeing Orion’s belt goes beyond just admiring the constellations and beauty in the sky, there is something deeper than that whenever you see Orion’s belt in the sky.

Whenever you see this constellation, it is a sign that the universe is trying to get your attention before communicating a divine message to you.

This might be new to you. However, in this article, I am going to reveal all of the deep secrets of Orion and how you can use the brightness and wisdom of this powerful star to live your life to the fullest.

Orion’s constellation has a spiritual meaning. A lot of gods in Egypt are deeply associated with this constellation because of how it is known throughout the whole world.

There are many mythologies and folklores concerning Orion’s constellation and how its powers have changed the life of a lot of people.

Furthermore, ancient civilizations and traditions have always worshiped this constellation as a god. It is believed that many gods derived their powers from Orion.

The Greeks believed that Orion was a gigantic and strong hunter who once walked the earth. He was the son of Poseidon, who is the god of the sea. This belief has become generally accepted all over ancient traditions across the world today.

In India, China, and other tribes that have deep spiritual roots, Orion is a god that is worshipped and greatly revered. This is one of the reasons why this constellation is known all over the world.

It is believed to be the brightest constellation of stars in the sky that is located at the celestial equator.

Therefore, with all of these brief historical facts, there is no doubt that there is a spiritual meaning to the Orion constellation.

Whenever this constellation shows up in the sky, it is a sign of resurrection and rebirth.

Ancient Greek mythology reveals that there was a clash between Gaia and Orion. Gaia decided to destroy Orion with a scorpion.

However, the serpent bearer who is called Ophiuchus revived Orion.

Therefore, whenever you see this constellation in the sky, it brings a spiritual meaning of rebirth and resurrection. It brings remembrance to the inhabitants of the earth that after death, there is a possibility to be reborn as a star, planet, or animal.

Orion’s constellation is also a symbol that magic still exists in the universe. The old Hungarian European folklore believes that Orion means magic. This is true because Orion was a magical being that was given birth to by Poseidon.

Therefore, whenever you find Orion’s constellation in the sky, it is a sign that magic is still present in the earth and Orion has remained in the sky to give us its powers.

Orion’s Constellation also brings a spiritual meaning that evil shall not prevail. This is the reason why it has some of the brightest stars in the universe and can be seen everywhere in the world.

It is a sign that as long as the Orion constellation continues to shine, evil will continually be vanquished and everyone who stands for the good of the universe will prevail over every evil force. It is believed that a lot of warriors draw strength from Orion to prevail over their enemies.

Therefore, Orion’s constellation is a sign of victory over the enemies. When the light of Orion shines over us, we will have victory over every power of the enemy.

Whenever Orion’s belt is seen in the sky, it is a symbol of strength. Orion is known all over the world as a strong hunter.

Although, it is believed that he got his strength from his father Poseidon. However, this is one major quality of Orion that cannot be denied.

Therefore, whenever Orion’s belt shows up in the sky, it is passing a message of strength to us.

Certain traditions believe that whenever Orion’s belt shows up in the sky, we should go outside and look up to it until we see a vision of ourselves in a better light. I have not tried it before, but I am excited at the feeling that comes from the thought of it. Maybe I will try it out someday.

Whenever you see an individual who does not easily give up in the face of life’s situation, there is a high possibility that he has leveraged the strength of Orion to see him through life.

Another spiritual meaning of Orion’s belt is the presence of a higher spiritual illumination in the universe. Whenever Orion’s belt shows up in the sky, it is pointing our attention to the fact that we can have access to spiritual knowledge.

The bright light of Orion’s belt is also a symbol of great teaching abilities.

That is, if you open up your mind to Orion, you will learn about the ways of life and be full of divine wisdom to live a life that is void of errors or calamities.

Beyond any shadow of a doubt, you have seen how important Orion’s Belt can be to our lives.

Furthermore, you have seen the spiritual meanings of Orion’s belt and constellations. In this section of this article, I am going to become more personal than general.

That is, I am going to give you the personal spiritual messages from Orion’s Belt to your life.

This means that whenever you see Orion’s Belt in the sky, it has come to give you these messages. Always be opened minded to receive all of these messages because they are going to be a major determinant of how your life will turn out eventually.

1) Right positioning is a key factor to your success

If you have been struggling to grow in your life, then Orion’s belt has come to tell you why this has been happening. You have been stuck on a spot because you have not rightly positioned yourself for the growth you have been longing for.

A lot of people don’t know this. Everybody who has experienced success aligned themselves properly with the level of success they are enjoying today.

Therefore, whenever Orion’s belt shows up in the sky, and you see it, the universe is sending a message to you concerning the right positioning.

2) You have enough wisdom for life

This is mostly an affirmation of what you have. Whenever you see Orion’s belt, then it brings a message of affirmation to you. The universe has come to affirm that you have enough wisdom for your life.

This is the reason why people always come to seek your counsel. If you have not seen anything special about your life before this moment, then it is time for you to begin to see yourself as someone special.

Just as the Orion’s Belt is a symbol of divine illumination, the gods have also put you on earth to give divine wisdom to everyone who needs counsel.

However, you have to nurture this ability by engaging in deep spiritual practices like mediation, praying, or reading.

3) You will receive clarity in your mind, and never be confused again

The Orion’s constellation is the brightest in the sky. Spiritually, light is a sign of direction.

Therefore, whenever you see Orion’s belt in the sky, the universe has come to give you a message that every confusing situation in your life is going to end.

From the moment you saw Orion’s belt, you are going to receive divine direction.

Pay attention to your heart. as the universe leads you, ensure you follow. By doing this, you will get out of every confusing situation of your life.

4) The spirits of the dead are watching over you

It is believed that when we die, we become stars in the sky. Therefore, whenever you see Orion’s belt in the sky, it is a sign that the spirits of your loved one are watching over you and protecting you from harm and danger.

This will make much sense to you if you experience this at the moment of loss. The universe has sent Orion’s belt to encourage you and fill you with the hope that your loved one is in a better place.

Furthermore, it has come to encourage you that your loved one is in the sky and watching over you.

5) Trust in your uniqueness

Orion’s Belt is a unique constellation in the sky. It has unique features and qualities, which has given it widespread recognition all over the world.

Therefore, whenever Orion’s belt appears to you in the sky, the universe has come to encourage you to embrace your uniqueness.

You are as unique as Orion’s Belt. Don’t let anyone make you feel inferior because you are different from them.

When you embrace your uniqueness, your mind will be opened to all the possibilities that are in you.

6) You are going to become influential

This is a prophetic message about how your life is going to turn out. When Orion’s Belt appears to you, it has come to give a glimpse into your future.

This is not one of the common messages of Orion’s Belt, but it is something that you should pay attention to you are going to know beyond a shadow of a doubt that Orion’s Belt has come to show you how your life will turn out.

Orion’s Belt consists of 3 stars. Spiritually, 3 is a symbol of unity and strength.

Therefore, whenever Orion’s Belt appears to you, the universe is telling you that you can face anything that comes your way.

Therefore, don’t allow fear to cripple you. You deserve more, and you have the strength to go for more.

What does it mean to see Orion’s Belt often?

When you continually see Orion’s belt, then it is a clear indication that you are not picking the message from the universe to you.

Most times, it is the universe trying to communicate with you.

Seeing Orion’s belt consistently is a clear indication that you are ignoring the signs in heaven, which might lead to severe mistakes in your path.

Does the Universe want to Give me a Message?

When Orion’s Belt shows up, it is a message from the universe towards you.

It is a sign that the universe has something to communicate to you.

Therefore, your responsibility is to be open-minded, bask in the energy of Orion, and allow it to reveal the deep messages from the universe to your soul.

Orion’s Belt will lead you and guide you if you allow it to. This is not one of the common constellations in the universe. It is special, unique, and powerful enough to equip you for any task that is at hand. Trust in the power and energy of Orion’s Belt as you look up to it for divine wisdom.

So, do you already know what is the spiritual meaning of this amazing constellation? Please, feel free to share your comments and opinion with us below!