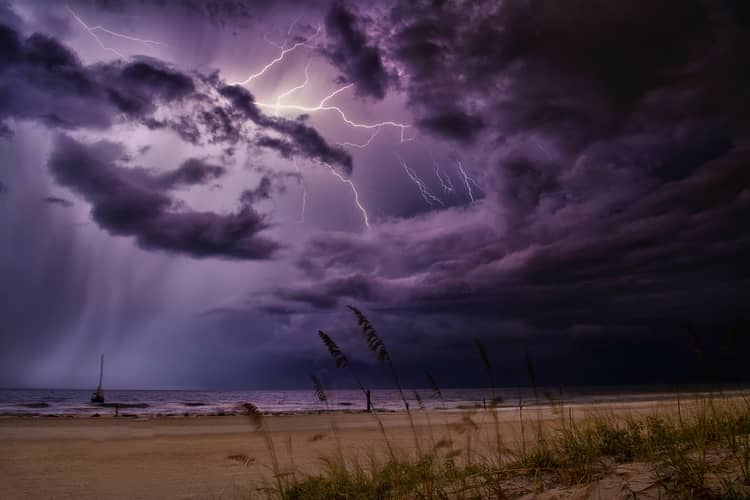 Today I’m going to talk about the symbolism of lightning bolt and also its spiritual meaning.

The never seen creator we all believe in makes us realize his presence in one form or another. The lightning bolt is considered as the very own call from God. However, many of us wonder why this lightning happens and what’s the hidden meaning behind it?

In Native American culture, a lightning bolt symbolizes a powerful connection to the spiritual world. Many people believe that this means it’s possible for us all to have an intimate relationship with God or any other divine being if we open ourselves up and let them in.

To clear your thoughts, we have research down the Lightning Spiritual meanings along with their supportive reasons to occur. Today we’re going to explore some of these meanings and see how they can be applied to our daily lives.

What does a lightning bolt symbolize?

Crystal clear from the word itself, lightning bolts generally symbolizes the very known God’s announcement and revelation to humans. It is said to be God’s Anger or Punishment to humans for their evil deeds.

It sometimes depicts the carelessness of humans towards mother nature. Their unstoppable act of exploiting and exhausting Earth’s resources. Lightening is God’s symbolism to let his people confront the truth of their actions.

What does lightning mean spiritually?

Lightning is a powerful and awe-inspiring natural phenomenon.

There are many interpretations of what lightning symbolizes on a spiritual level, some of which include:

In this post we will explore how different cultures have interpreted lightning as well as its significance in those cultures’ mythology.

Spiritually, as the name suggested, lightning is an aspiration for a new ray of hope or light into our lives.

It represents the honest, brilliant thoughts in our minds. It also brings in the knowledge and insights for our upcoming projects in life. Finally, it ascertains us to work with strength and believe in our ability to achieve the goals.

To aware you with error-free knowledge, We have explained the Lightening symbolisms simply and most quickly feasible:

Just like Lightning symbolize the Power of God to knock down the sinners. It is also the sign to present the energy within us even to do the impossible. It instructs us to look deeper upon our potential and ability to do the things we usually feel unconfident about.

The soundness of one’s character can be predicted by his solidity to stand out in challenging situations.

If you are not willing to take minor risks associated with your future goals, you won’t win the crown of success. To achieve your goals, learn to dominate your potential over your problems.

Even though Lightning is an unexpected affair that occurs in the spur of a moment. It relates directly to us; life is an unknown journey for all of us. No one knows what will happen next.

Any surprising and terrible affairs can take place. So, it’s better to be ready with acceptance against such instant happenings.

Lightening enlightens the visibility of the brain to think clearly upon your ideas. If you are stuck in between your thoughts, then witnessing a lightning bolt from far has a sign for you. It informs us to kick off all the negativity and focus on the creative side.

Only then will you get to witness your transparent ideas.

Since the former times, lightning has been the declaration of God to open the sightless eyes of the wrong-doers.

As outlined, it brings in the vision to educate yourself with the rightness. It awakens our soul and brings in the knowledge of virtuous actions in life.

A lightning bolt is an electrically charged spark caused due to an imbalance among the stormy clouds. In psychic terms, it refers to the power to re-energize one’s mind and soul full of dedication and hard work towards your target.

The thunder highlights the fearless nature of lightning bolts. It directs us to have courage and daring to overcome hurdles in our way.

Sometimes, we choose the path where we need to be daring and reckless enough to suppress the barriers away.

The release of electrical energy due to lightning helps break down nitrogen atoms in the environment.

Mostly, rain comes right after or along with the storm. Along with the rain, fresh and new nutrients are transferred to the soil. Thus, lightning is a sign to maintain soil fertility as well.

What does lightning symbolize in Bible?

There are a lot of phrases in the Bible picturizing Lightning. Sometimes, it is used as God’s arrows to put an end to evil or sinners. And other times, It represents how powerful and glorious God is.

For reference, some popular biblical phrases about lightning are:

In (i) phrase, lightning is used as a bolt by God to chase the culprits. Whereas, in the (ii) expression, it is applied to see the potency and divinity of the Almighty Creator.

The lightning is the symbol of change, power and life. It’s not just a myth! The ancient Greeks thought that Zeus sent bolts of lightning as punishments to those who had displeased him.

Lightning was also seen as the sign for fertility in some cultures because it represented fire, which can both create and destroy. In other traditions, it was associated with rainbows because they often appear after storms. This is why many Native American tribes refer to thunderstorms as “The Voice of God.”

Different people across the World look upon Lightning definitions differently according to the particular cultures they believe in:

Thunderbird has been a famous legend among Native Americans since the olden days. Their wings exhibit the approaching light and thunderstorms. The natives consider lightning as a celestial and supreme sparkle brightening the World.

Zeus is the God of the sky; he is accountable for all the actions of rain, lightning, and thunder up in blue heaven. Lightning Bolt is said to be God’s sword of power. Greek and Roman people transform such places into sacred and holy places in most parts where lightning has dropped down.

In Hinduism, Lord Indra – is known as the custodian of clouds, rain, lightning, and storm. The lightning in the sky is the symbol of wisdom and truth among Indians. It serves the function of an eye-opener and teaches them the quality of self-realization and awareness.

Due to the solid positives and negatives of lightning. Lightning Bolts in dreams are taken as both good or bad signs. If you dream of just the lightning, then it relates to something surprising coming into your life for your tremendous and appreciable efforts.

But contacting a lightning bolt with the storm marks as a warning of misguidance by your closed ones or much more terrible events to take place.

Spiritual meaning of being struck by a lightning

If you are an atheist and indulge in sinful and unethical things without fear of God, The lightning dreams will often haunt you to interrogate yourself.

It explains to you God’s message over and over again to self-introspect. And chose the path of religious deities before it’s too late. Because once God is displeased by you, your hard luck in life will begin.

The Bible discusses the spiritual meaning of being struck by a lightning. It is in Romans 12:20 that it says, “If your enemies are hungry, give them food to eat; if they are thirsty, give them water to drink.” This passage implies that receiving a literal strike from an electric current could be considered as a blessing.

The word “blessing” means something good or desirable and this is what I believe when I think about getting struck by lightning – it’s not really bad at all because you’re going to get saved from harm and maybe even death!

Tree struck due to lightning results from an abruption and signified the bad to come to your way. This event can even be deadly. So, it prepares you to be ready for the intolerant and horrible incident coming into your passage.

It is advised to pray and devote more time to God during such times. There is no hope other than God for us to stop such dreadful and awful episodes from emerging.

A tree is struck by lightning, and we wonder what it means. It’s a frightening sight to see the sky light up with such ferocity, and for all of us who live in fear of our own mortality, it can be terrifying.

But there is more than just death that these trees tell us about ourselves when they are hit by this powerful force from above – something that many people still haven’t tuned into yet.

Cooked-up stories without any logic are the nature of humankind. Some such superstitions or beliefs for lightening are:

1. Do not repeat at the same place

Many people believe that lightning never occurs again at the particular site when it had once fallen. But it is a total myth as lightning most probably happens at the same places.

Most of the time, our parents tell us to stay at home during thunderstorms. Yes, the house is indeed the safest place of all to protect us. But we never knew the direction of the falling light bolt. It can arrive from anywhere. So, we can’t accept our houses to be 100% non-conductors.

Many prefer to hide behind the car tires and sitting in the car, thinking the rubber material used in the vehicle will act as an insulator of electricity. But these people usually forget to give a second thought that what a mere piece of rubber will do to a thousand tons of an electric bolt.

4. Lightning is harmless without rain

When the sky is clear, and it’s not raining, then there is no chance of lightning striking down on the ground. If you believe in this superstition too, then sorry, my friend; It’s a false claim. Lightening can fall in the presence as well as the absence of rain. It has no relation with the occurrence of the shower.

Most people start to remove off and side away from their watches, phones, bangles, and other jewelry items. This is because they guess these things to catch lightning first, as metal is used in their making. But the myth is invalid, as mountains even got struck by lightning when they were all made up of stones.

I wish you have got your answer and cleared out the question marks for the questions muddling into your mind after going through the above article about spiritual lightning bolt meaning and symbolism in brief.

Overall, lightning is a sign of celestial conveyance of God to us.

I will suggest that the key to living a peaceful life is only to think and focus on positive aspects. Believe yourself, and you will cross the ocean of difficulties very soon.

If you have any queries, feel free to ping us in the comment section below. Our experts are ready 24X7 to assist you with the guidance.

I love what I write, I write about what I love. I share my knowledge about spirituality (and beyond) through articles on Angelical Balance and videos on my Youtube channel.