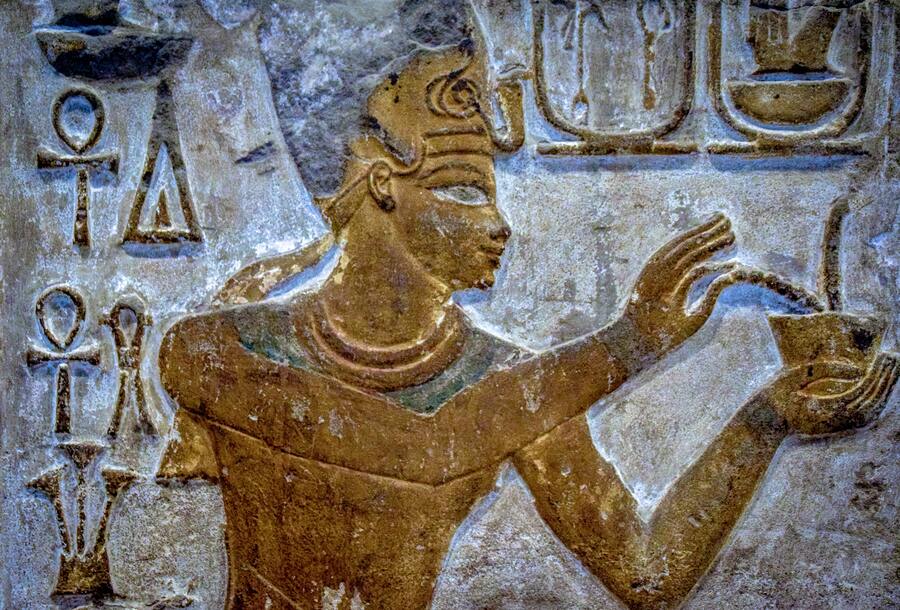 The Eye of Ra is a symbol that dates back to ancient Egypt and may be seen depicted in hieroglyphics, paintings, and carvings.

It was often believed that the eye could perceive anything.

In this article, we will discuss what the eye meant in Egyptian mythology and how it contributed to myths and stories revolving around Ra.

The significance of this symbol can vary depending on who you ask.

What is the Eye of Ra?

In ancient Egyptian mythology, the Eye of Ra is a being that serves both as a female counterpart to the sun god Ra and as a destructive power that can be used to overcome Ra’s adversaries.

The eye is an extension of Ra’s might and is equated with the sun’s disc.

However, the eye also behaves as if it were its separate entity, and it can be personified by a wide variety of Egyptian goddesses, such as:

The sun god is the father of the eye goddess, who also serves as his mother, sister, consort, and daughter.

She is his collaborator in the creative cycle, which results in a refreshed version of him being conceived at daybreak and brought into the world.

Agents of chaos challenge Ra’s rule, and the violent qualities of the eye serve as Ra’s defense against these challenges.

A different interpretation of the Egyptian eye refers to the Eye of Ra emblem. The Eye of Ra is typically portrayed as the right eye, and it stands for rage, power, and violence.

In Egyptian mythology, Ra was a god who represented the sun.

Later on, Ra merged with Amun to form the divinity known as Amun-Ra. Since Ra was later confused with the god Horus, it should not come as a surprise that Ra was painted with the body of a man and the head of a falcon, similar to how Horus was portrayed.

In addition, Ra, worshipped as the god of the sun, was depicted with a sun disc atop his head. As a consequence of this, the Eye of Ra is traditionally connected with the sun as well.

This symbol is one of Egyptian art’s most prevalent examples of religious iconography.

This is because the sun held a significant place in Egyptian belief systems, and this emblem represents the sun.

Even though Egyptologists frequently refer to this symbol as the “sun disc“, the fact that it appears in reliefs in Egypt with a domed shape implies that the Egyptians may have viewed it as a sphere.

It is common practice to place the symbol, which represents a connection to the sun, on the heads of gods and goddesses associated with the sun, including Ra himself.

The disc could even be considered to be the corporeal manifestation of Ra.

At other periods, the sun god was depicted inside the disc, as if it were enclosing him there.

His appearance took many different forms.

Why is the Eye of Ra important?

It is significant because The Eye of Ra symbolizes the destructive aspect of Ra’s power, which is the sun’s heat.

The sun’s heat in Egypt can be so intense that the Egyptians sometimes compared it to arrows shot by a god to destroy those who commit wrongdoing.

The uraeus is an appropriate representation of the destructive potential of this force.

Eye of Ra in Dreams Meaning

If you dreamed about the eye of Ra, it portended that you would be getting some awful news soon. Sadly, your financial condition is going to worsen. An unanticipated loss will impact you and put you in a challenging position.

It won’t be anything major, but it will hurt. To dream about the eye of Ra is a bad omen for financial success.

Get started putting away cash immediately.

If you make the right decisions, you can quickly get over this trying time.

Dreaming about the Eye of Ra is a portent of impending deception.

Someone you trust deeply might be the one who betrays you.

As a result of this debate, you will feel pain. You will start to question whether or not you have any genuine empathy for others.

Don’t lump everyone together too quickly; you have many trustworthy friends and family members cheering for your success.

But this conflict also provides an opportunity to talk things over with this individual and maybe get back on the same page.

Conflicts in the workplace:

Alternatively, if the eye of Ra appears in your dream, it might foretell a conflict at the office.

It’s possible that this dissimilarity is causing you some unease and leaving you a bit vulnerable.

Don’t lose your cool; think calmly and creatively to discover a solution.

Instinctively, you know that your superiors will recognize and reward your good attitude, and thus the dream of the eye of Ra serves as a communication from your unconscious to that effect.

If you dreamt about the eye of Ra, it indicate that you were experiencing a crisis of confidence.

Yet, if you dream about the eye of Ra, it’s a reminder that your gut is rarely wrong.

You must train yourself to trust and respect your intuition.

Dreaming you have the eye of Ra indicates emotional uncertainty in a committed relationship.

You have a lot of doubts and concerns, but you can’t seem to pin them down.

To restore your self-esteem, you must interrupt your routines and open yourself up to a surprise.

You have to have greater independence, or else you’ll let yourself deteriorate.

9 Spiritual meanings of the Eye of Ra

The Eye of Ra reflects the solar god’s femininity. The eye is an extension of Ra’s power, yet she’s autonomous.

She’s loyal, tough, and independent, not only in Ra’s eye. Her power is a self-ruling, all-knowing being incarnation of several Egyptian deities.

The eye of Ra is Ra’s mother, sister, consort, and daughter. She has always contributed to the cycle of a new day’s dawn.

She represents renewal, the sun rising over the countryside.

As a descendant of Ra, the sun deity, she is identified with this beautiful orb.

Sun and moon were considered the gods’ and goddesses’ eyes. The Eye of Horus is the moon, or the lunar god, like the Eye of Ra.

These pictures underline the sun’s importance in their culture and religion.

Generally convex or round, the sun disk is depicted above the heads of sun-linked gods, primarily Ra.

Some historians think this disk or sphere represents Ra. The Eye of Ra is a source of light and warmth like sunlight, flame, or a pink horizon.

3) The eye of Ra Symbolizes Reproduction.

She represents Ra’s creativity. She signifies fertility and birth as a mother. Ra’s birth has traditionally been associated with the sunrise.

Hathor, a sky and sun goddess, is the Eye of Ra.

Hathor is connected to Horus, the sky god. Also, Hathor and Horus are like Ra and his eye. Ra entered the sky goddess’ body at dusk, regarded as pregnancy and rebirth in the morning.

The eye suggests creation and replication. Ra’s daughter gives him a son, and so on.

The Eye of Ra often attacks and represents Ra’s destructive aspect. This is the sun’s heat. The sun disk, or uraeus, represents this power in ancient Egyptian art.

Egypt’s climate and people are notoriously harsh. Many tomb paintings and pictures compare it to sharp arrows meant to fend off evil.

Egyptians utilized the uraeus to symbolize the Eye of Ra’s destructive power.

The eye of Ra is Ra’s feminine counterpart.

This is how an overprotective mother is seen.

The Eye of Ra is a black-charcoal eye. This dark, sensual eye radiates mystery.

Some have compared The Eye of Ra to a loving, caring mother who, if upset, wants ultimate retribution.

The Eye of Ra has several forms.

She represents feminine divinity and has long been linked with major and antique deities.

She becomes the sun-associated cat. Bastet is a cat deity and a lioness. The Eye of Ra also resembles the king-protecting cobra.

Other cobra goddesses protect holy sites and tombs. The eye typically looks like a cow, a vulture, the stars, and even humans.

The Eye of Ra represents power and strength.

In religious rites, she is requested to protect people and places.

People flock to her for the protection of their farms, families, and fortune due to her mother-like strength and assertiveness.

This again shows a dominant matriarch.

8) Myths About Eye of Ra

Myths and legends are a significant portion of Ancient Egyptian culture, and “The Eye of Ra” is no exception.

In one version of the myth, Ra learns that his two children have disappeared.

He searches everywhere in the world with the gaze of his eye to discover them.

The Eye of Ra can locate the two children, but upon their return, she is overcome with feelings of betrayal since another eye has taken her place.

Ra bestows upon her a perch in the shape of a king cobra on his own head.

It is also said that when his offspring come back to him, Ra drops vast amounts of tears, which are then used to make use of human tears.

These tears are also linked to the flooding of the Nile, which, in turn, generated rich farmland.

Both events are said to have occurred at about the same time.

Because of this distinction, many individuals consider them to be the same.

Sadly, it does not appear to be the case.

However, other academics believed that the Eye of Ra represented a solar disk with two cobras uraeus.

Is the Eye of Ra a spiritual message?

Yes, it is a message.

Ra’s eye symbolizes the right eye, whereas Horus’s eye stands for the left.

As the solar god, Ra might rival the supreme deities of the monotheistic faiths.

So much so that his eye is dubbed “the eye that sees everything” due to its prodigious capacity for seeing.

Is the Eye of Ra a positive or negative symbol?

In a broad sense, the Eye of Ra is regarded as a symbol of protection, which, in turn, may result in favorable fortune.

However, the eye is not a sign of good fortune in and of itself.

The Evil Eye, also known as the Nazar boncugu and having its roots in Turkish culture, is not the same as the Eye of Ra, an ancient Egyptian symbol.

Although both are meant to ward against harm, the Evil Eye is not associated with any religions practiced in Ancient Egypt.

It is utilized in a more general sense.

One of those tales brought to life through jewelry and other spectacular objects is the Eye of Ra, which is stunning.

Unique in form, presentation, and the depth of its spirituality and power.

Its message is profound, and details like that make a big impact.

That’s why reading more about the Eye of Ra and its history is a smart move. After all, that sets it apart from everything else and makes it thrilling.