Home » What Does a Whale Symbolize? 7 Whale Meanings

What Does a Whale Symbolize? 7 Whale Meanings 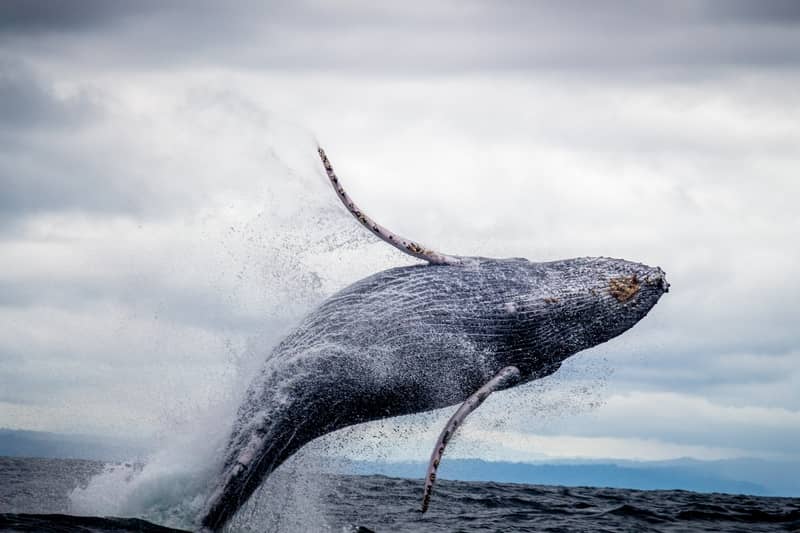 Whales are amazing animals that you rarely see. But what does a whale symbolize in spiritual world? In this article, I will show you the whale symbolism and spiritual meaning for your life.

In addition, I will talk about its importance and messages in the spiritual world the whales.

So if you want to know everything about the whale in the spirit world, for Native Americans and for your life, read on below.

What does a whale symbolize?

Dreamers may even perceive whales as a threat to their lives. They could also mean you are anxious about something big or an event that has bothered you.

But, on the other hand, the whale may also signify peace, tranquility, and serenity, according to some dream interpretations.

There is no doubt that the white whale is a symbol that stands out from literature. A character whose purpose is to represent an abstract idea or concept is considered to be a symbol. White Whales have been interpreted as representations of God, nature, Leviathans, the subconscious, etc.

It’s hard to argue with any of these points since we don’t know much about the White Whale; he’s described mainly through other people’s perspectives. Ahab and the others in the story are the ones who discuss Moby Dick the most; we only see him a few times as readers.

Consequently, we can come up with our ideas of what Moby-Dick means, as well as use theirs. The white whale is believed to symbolize God because of its symbolic nature. There are two reasons why this interpretation is reasonable.

First, several times, the White Whale is described as something that people should leave alone because it is powerfully destructive and killing the White Whale fails to stop it, suggesting that he is not just another whale but a force to be respected and not interfered with.

Based on Ahab’s challenge to prove he could beat the White Whale, Ahab argues that the White Whale represents nature. Having lost his leg a number of years ago to Moby Dick, Ahab has always been determined to kill Moby Dick and show that he has the ability to take revenge.

Even in the face of numerous warnings from his crew members and sailors who took on Moby Dick, Ahab continues to face the whale, and is eventually killed by it.

It conveys the message of magic through creativity through the symbolism of Humpback Whales. Because success is within reach, you should not give your creative endeavors like the sea turtle.

It may also mean that you should sing your own song throughout your life. Therefore, you will find fulfillment and purpose as you separate yourself from others choice’s. . Taking a unique approach to making decisions is part of your path.

There are always big things ready to  happen in your life today when the symbolism of the Blue whale appears to you.Even though you feel overwhelmed by the changes, this creature assures you that it is for the best.

Consequently, you have to stay focused so you can move forward in the right direction. It represents your faith in yourself and your ability to remain calm and composed, even in the face of difficult circumstances.

The Sperm Whale’s meaning in this scenario is a reassurance of the enormous potential within. Basically, you have mostly all the resources and abilities necessary to accomplish your goals, regardless of how far away they may seem. It’s just a matter of engaging in the process.

Magic happens when there is this clarity. Whenever you trust, believe, and act, you will receive help from the Universe. Sperm Whale says you should not, afraid to use your power, so embrace it.

The meaning of Sperm Whale also signifies that everyone is free to make their own choices in life. You should choose a path based on your uniqueness because of this.

It is the whale’s meaning that lets you know you are not lost as much as you think you are. You’ve lost a little direction, sure. You can return to the right track with ease, however.

The way will become apparent to you if you simply take a few small steps in the direction you think you should be going. You just have to prove that you are still serious about getting there.

It is a reminder that you are your best friend when you see the Beluga Whale in real life. The spirit Whale wants you to embrace who you are. Ignore any faults or criticisms you think you have, and accept yourself unconditionally.

Don’t forget to appreciate yourself for the beautiful individual. You will be able to accomplish anything if you love yourself.

As Narwhal points out here, we each have our own unique ways of doing things. Your personality remains the same no matter your appearance or your attire. Decide what’s best for yourself, thus.

As a symbol, the Grey Whale is intended to be a reminder that you are not as far away from your goals as you think you are. Change your perception of time and distance to achieve your goals.

Whether they perceive you as closer or not depends on your perspective. It is likely that they won’t be realized for quite some time, if you believe that. Time and distance appear insignificant in the big picture.

Whales blend consciousness with the unconscious. In dreams, you may see a large mammal that offers guidance that will help you become an instigator with a strong sense of responsibility and independence.

We must speak and stand up when we dream of whales. Whales are frequently interpreted as representing awareness and intuition. It is time to turn up the volume on that inner voice of yours and listen more closely to what it has to say.

It is symbolic of feeling overwhelmed by the immense size of a whale. The workload, personal responsibilities or social obligations may be too much for you. Cut back on some expenses if necessary.

There is a connection between whales and Solitude, and compassion and death are knowledge. Unbridled creativity is associated with them as well. It symbolizes one’s own independent creative energy being released through exhalation. Sound also contributes to the creative process.

Native Americans living along the Pacific coast and some South American peoples worshipped whales as sacred animals. Several whales were nearly wiped out by relentless hunting by others.

According to an Inupiat legend from the Arctic, the bow whale is the perfect animal created by the Great Spirit. Whales were revered in their culture and hunting them required passing through initiation rites. The hunter had to integrate medicine and pain from the animal all over to perform these rites properly.

During Europe, whales were also respected since they were considered symbols of life, death, and the world. The ocean, an environment that is foreign, vital, and deadly to men, symbolized whales.

The whale’s compassion and Solitude, and knowledge of life and death are associated with the whale. Their creativity is also unbridled. Through the blowhole, the creative energies are released. Sound also contributes to the creative process.

Earth’s record-keeper is the whale spirit animal. Totemic to the whale is the ability to listen to your inner voice, understand the impact your emotions have on your daily life, and speak truth to yourself.

The whale messages for you

Whenever a whale enters your life, it is probably time to examine where you are, the actions and feelings that have brought you here, and what is needed to ease existing drama and unrest to find peace.

The whale is an animal totem of actual reality for those who have it as their animal totem. Their nurturing natures and drive to succeed in this world are more than just apparent.

We often associate the whale with emotions, creativity, and inner truth.

This totem also has the following meanings:

Moby Dick, the giant Sperm Whale, known as Captain Ahab’s pursuit of the whale, is probably one of the most famous modern stories about whales as teachers. It is infused with superstition, a transformational vessel that is the sea, and a probe into the massive mammal, a creature of great unknown.

The whale symbolism in other cultures

In some cultures, a whale represents something that cannot be trounced – just as a person’s inner strength, creativity, and voice cannot be quickly quelled or tamed.

Despite being able to communicate thousands of miles across the ocean, whales are excellent communicators. To bridge large distances with others, we need the whale to help us communicate from our hearts.

In addition to being family-oriented, whales also help us bridge any gaps that stop us from sharing our lives with those we love deeply. When we speak our truth, whales offer support, vulnerability, and strength.

Whales that swim freely are considered lucky by some cultures and traditions. Therefore, whale sightings are thought to represent good fortune. Conversely, it is regarded as an omen of ill-fortune to find a beached whale that is diseased or diseased-looking.

So, do you already know what does a whale symbolize in the spiritual world and the whale spiritual meaning?