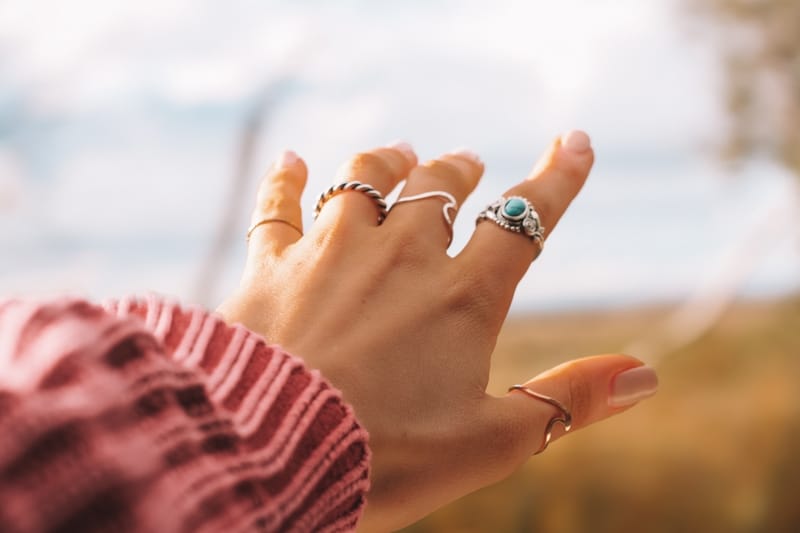 What is the spiritual meaning of wearing rings on different fingers? Let’s find out!

Special events in your life like your engagement or weddings are marked by that symbolic ring that you may adorn for the rest of your life.

Some fashion-conscious people wear rings just for their material beauty.

The stonework on the ring, its elegant design, and of course, the value of the metal (gold, platinum, etc.) add to the aesthetic charm of this beautiful jewelry.

However, there’s more to these artistic pieces of metallic work than fashion statements. Rings have deep social and spiritual messages associated with them. Studies have revealed the spiritual significance of wearing a ring on each of your fingers.

The symbolism of rings on each finger

Historically rings have symbolized deep human sentiments and characteristics. Devotion to a spiritual representation, either in the form of a ritualistic belief or to worship a particular deity, is common across various cultures.

Rings also signify loyalty and perpetuity. However, we should first consider why people wear a ring in the first place. Some of the most common purposes are-

Each finger has a symbolic connection with the ring. Let’s explore them.

The thumb had often been a representation of positive expressions. The thumbs-up is recognized across the globe as a symbol of appreciation or acceptance.

A ring on your thumb finger could be a mark of freedom, strength, and or singularity.

In the index finger:

A ring on the index finger symbolizes natural leadership qualities. Someone who is the go-to person for his friends or colleagues and who is always ready to take on additional responsibilities willingly.

He is supremely self-confident but at the same time very critical of himself and the situation surrounding him.

In the middle finger:

In the ring finger:

No marks for guessing this one! The ring finger stands for loyalty and creativity.

In the pinky finger:

The little finger, also known as the pinky finger, doesn’t necessarily have a strong religious significance in many cultures.

Wearing a ring on this finger, though, suggests someone with persuasive abilities who is quick-witted and a born orator.

Spiritual meaning of wearing a ring on different fingers

Jewelry has had spiritual significance since ancient times. Rings, necklaces, pendants, and a host of different varieties of stones have been used to denote several spiritual beliefs.

Often these metals or stones are adorned to rectify any disharmony on your spiritual charts.

One of the most commonly used jewelry, the ring has been known to have profound spiritual significance. The finger on which it’s worn defines their spiritual meanings.

The thumb doesn’t have any religious association with a Greek God in palmistry. However, it is the strongest of all the fingers. Thus, it represents the strength of character and willpower.

Sporting a ring on the thumb may mean that you are trying to dig deep into your well of mental strength.

You may also be reminding yourself of the power that lies within you.

It’s also a practice to wear a message-bearing ring on the thumb. This is not only a style statement but also showcases your fortitude to the observer.

Another spiritual significance of the ring on the thumb is that it represents your commitment to relationships. You are someone who values family ties and friendship, along with your faithfulness to your romantic partner.

Alternatively known as the pointer finger, it’s arguably the busiest finger in your hand. In palmistry, it represents Jupiter.

It is used for holding the mighty pen or typing away furiously on your laptop. People also use it to point at someone or to drive home an argument that they passionately believe in.

Being such an important finger, it’s obvious that wearing a ring on this finger has great spiritual gravity.

Contrary to the common practice, in some cultures, women wear the wedding ring on their index fingers.

Historically, in certain Jewish traditions, women would wear the wedding ring on the right index finger before the wedding rituals. Later, they change it to the left index finger after the ceremony. The ring itself would be a simple gold ring but carefully chosen for the occasion.

The Western culture, though, promotes wearing the wedding ring on the left index finger. In keeping with modern conventions, even some Jewish couples have relinquished their traditions and use the ring finger instead.

Further, they have moved from using only gold to other modern varieties such as colored gemstones and fun wedding bangles.

Apart from marital rituals, the index finger also reveals characteristic boldness, power, and ambition in the person wearing a ring.

Many people in authoritative positions, such as kings, priests, bishops, and spiritual healers, adorn a ring on the index finger. This marks their personal expression of leadership and power. It also denotes an egoistic mindset.

In the middle finger:

The controversial middle finger has practically and metaphorically been in the thick of things.

It is representative of Saturn in palmistry.

In terms of spiritual or symbolistic impressions, a ring on this finger indicates a balanced person who has an air of dominance around him.

Its location and size make it fairly common amongst ring wearers to sport a ring on this finger. More so if you are not wearing one on either the index or the ring finger.

A ring on the middle finger denotes a show of power to the outside world.

Though the middle finger represents Saturn, wearing a ring on that finger doesn’t have any clear spiritual significance. It can be perceived as a statement to the world about your personality.

In the ring finger:

This isarguably the most common finger to adorn a ring, particularly for married couples.

As it is involved in matters of the heart, one tends to wear the most precious jewelry on this finger, more specifically, the left ring finger.

Though some cultures profess to wear the wedding ring on the right ring finger, it’s widely worn on the left ring finger.

Apart from marriage rings, engagement and promise rings are also seen on these fingers. A promise ring represents a committed relationship that is yet to reach the stage of marriage.

Most couples showcase their fidelity to each other by wearing a promise ring on the left ring finger. Some may choose to use the right-hand finger to avoid concussion with an engagement ring.

While the left ring finger is most commonly used to wear a promise ring, some men like to wear them on the right ring finger.

The right one also represents creativity and versatility. A statement ring on this finger also draws the attention of the crowd.

Pre-civilization historical studies suggest that Neanderthals were the first to use rings on this finger. They would use twigs or grasses to make small wearable wreaths that partners would wear.

In certain parts of Asia, the ring would be made of softwood that fell apart if removed, thus indicating unfaithfulness.

In the west, men started to wear marriage rings only during World War II as a symbol of carrying their love to the war front.

Donning religious metals on this finger is also considered auspicious.

The little finger is often considered the mightiest by many symbologists. Wide across the world, a show of your pinky finger has a social message. The power of this tiny finger is not to be undermined.

Hollywood may have created a link with the underworld by showing the gangsters with a ring on their fingers.

However, a ring on this finger is often a show of elegance and class. In some cultures, the family crest is donned on this finger.

In palmistry, the pinky finger represents Mercury. A ring on this finger is taken as a token of exemplary character.

Since the right is the most dominant for most, fresh graduates often wear a ring on their right pinky finger. It’s a mark of their achievement.

For sporting milestones also, this finger is used for donning rings.

Spiritual meanings of wearing rings on the right and left hands

While each finger has a different spiritual connotation, the hand also plays an important role in this regard. Not only that, the gender defines the spiritual significance of rings on each finger.

Men can wear rings on either hand while women generally prefer the left hand. Different cultures have different undertones for such usage of hands.

The most powerful finger sends across a power statement. Men in influential social strata, at times, don a ring on their thumb as a sign of their authority.

It’s not frequent to see men wearing rings on their middle fingers. However, some may do so due to its prominent visibility to showcase a symbol of masculinity.

The spiritual meaning of a ring on this finger is very much culture-dependent.

While most men in the west use the left ring finger for engagement or wedding rings, some societies use the right finger for the same purpose.

In Great Britain and other Western countries, men sport a signet ring on their pinky fingers.

This traditional practice further symbolizes family status and bonding. You can often see a family crest on this finger.

Traditional fashion includes toe-rings in many cultures, particularly in the Indian subcontinent.

On the right foot:

On the left foot:

Apart from the above, the left toes additionally denote the following:

What does a ring on the middle finger mean for relationships?

The middle finger doesn’t have a specific spiritual significance. Since its position signifies balance in life, it also has an implication for relationship harmony.

A ring on this finger may denote an endeavor from either partner to bring a semblance of equilibrium to their relationship.

Every spiritual message has its foundation in cultural and religious sentiments. If you love wearing rings on your fingers, pause for a moment to understand the spiritual implications of rings on different fingers.

So, do you already know what is the spiritual meaning of wearing rings on different fingers? Please, feel free to leave your comments below!